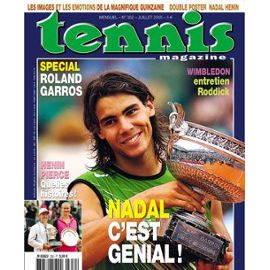 It was eventually forget why Nadal beat Federer all over successive years. Having disappeared after Federer lost to turn for a good thirty months, Nadal returned to settle accounts since Federer lost count. This is the story of his return and his 2013 season. We already knew that Nadal would return if it was sure to win it all, not just to play games and see how it went, as he promised, of course, the eyes full of uncertainty. This does not prevent him from tell the truth when they shot him in the mouth the Murray-Djokovic era . Do not fool anyway, so he replied that the Federer-Nadal era was perhaps not over. That did not stop the fight three times in 2013.

For his return appears to be one, Nadal was allowed to be zero one or two games for his first tournament, even not to win but it did not last. At this time in the final of a tournament where Chilean not set foot, rallies on clay against Zeballos was hard, the ball bounced high Zeballos, the amortized Zeballos hurt and the small cut regularly scheduled for Zeballos was for him. Nadal was not the solution. Affirm that this time he did not see Zeballos but Djokovic would give great honor to Zeballos little or Djokovic and Murray even less. Yet this was the case.

Because since Nadal won everything except what he did not want to win, except Monte Carlo, though the story of invincibility was possibly shit. This is a blow to become really invincible and it is more fun to be elsewhere. Above all, he was not ready to attack when Djoko this little boastful managed a break, even won a set. A Roland, he was ready. We do not not put 6-1 after a 6-3 to Djoko and we do not win 9-7 in the 5th round if Nadal is not because for once, was Djoko Djoko and it has the excuse lipoma arborescens of the knee synovium .

But it was right after that that Nadal has made ​​his great progress, one that allowed him to wipe everyone for his tournament recovery cement, one that will allow him except injury to win U.S. Open and be number a world in October, he lost in the first round of Wimbledon without a shadow of remorse. He just had not guilty of giving pleasure to a Belgian , not giving a damn too and let uncle about his knee, ie let it manage his career . It’s quite simple to be the best, you just accept that you can lose 3 times in 55 games but choose their dates.

The rest is as simple as before, and it works against small running quickly, who hit the big box, the geniuses of Beziers with a sacred talent, the Giants used to 230 and probably against Santoro but never know: engaging exchange, expect putting everything until his left big biceps decides win the point alone. Basically it all depends on his knee.